How to Install Maven On Amazon Linux/RHEL

In this session we are going to learn How to Install Maven On Amazon Linux/RHEL. Maven is a build automation tool used primarily for Java projects. Maven can also be used to build and manage projects written in C#, Ruby, Scala, and other languages. The Maven project is hosted by the Apache Software Foundation, where it was formerly part of the Jakarta Project. Maven addresses two aspects of building software: how software is built, and its dependencies. Unlike earlier tools like Apache Ant, it uses conventions for the build procedure, and only exceptions need to be written down. An XML file describes the software project being built, its dependencies on other external modules and components, the build order, directories, and required plug-ins. It comes with pre-defined targets for performing certain well-defined tasks such as compilation of code and its packaging. Maven dynamically downloads Java libraries and Maven plug-ins from one or more repositories such as the Maven 2 Central Repository, and stores them in a local cache.This local cache of downloaded artifacts can also be updated with artifacts created by local projects. 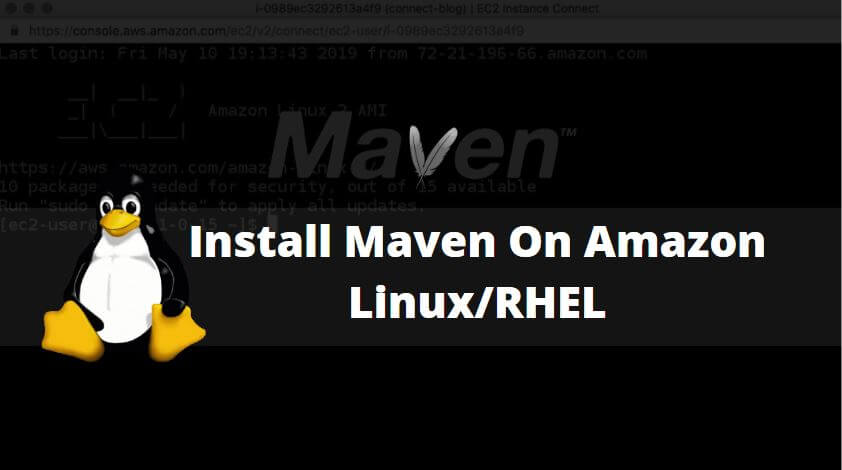 How to Install Maven On Amazon Linux/RHEL

Follow the below Steps to Install Maven On Amazon Linux/RHEL:

Connect to your Amazon EC2 instance with an SSH client. Install Apache Maven on your EC2 instance. First, enter the following to add a repository with a Maven package

Enter the following to set the version number for the packages.

Then you can use yum to install Maven.

The Gremlin libraries require Java 8. Enter the following to install Java 8 on your EC2 instance.

Enter the following to set Java 8 as the default runtime on your EC2 instance.

When prompted, enter the number for Java 8.

Enter the following to set Java 8 as the default compiler on your EC2 instance.

When prompted, enter the number for Java 8.