How To Force Users To Change Their Linux LDAP Password

This tutorial shows you How To Force Users To Change Their Linux LDAP Password (Lightweight Directory Access Protocol ) using the chage command. A system administrator’s life is not an easy one. Maintaining system integrity, maintaining security, troubleshooting issues. There are so many spinning plates. When it comes to security you need your users to choose a strong password and you need them to change it periodically. 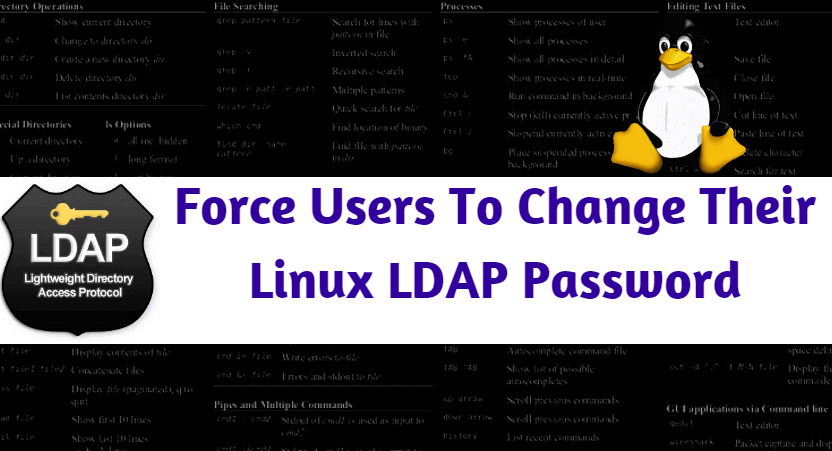 How To Force Users To Change Their Linux LDAP Password

To find out about a user’s password expiry information run the following command:

The returned information is as follows:

You can force a user to change their password after a set number of days by using the following command:

You will need to use sudo to elevate your permissions to run this command or switch to a user who has the appropriate permissions using the su command.

If you now run the chage -l command you will see that the expiry date is set and the maximum number of days is 60.

You can, of course, specify the number of days that suit your own security policy.

Also Read- How To Change Hostname In Ubuntu 17.10 Without Restarting The System.

How To Set The Expiry Date For An Account

Imagine, guest user John and Patrice are visiting your office for a few days.

You can create each of them an account using the following adduser command:

Now that they have accounts you can set their initial passwords using the passwd command as follows:

Imagine that John and Patrice are leaving on the 1st January 2018.

You can set the expiry date for the accounts as follows:

If you run the chage -l command now you should see that the account will indeed expire on the 1st January 2018.

After an account is expired, an administrator can clear the expiration date by running the following command:

To set the number of inactive days run the following command:

An administrator can clear the lock by running the following command:

You can warn a user every time they log in that their password is going to expire.

For example, if you want John to be told that his password is going to expire in the next 10 days run the following command:

To prevent a user from changing their LDAP password too often you can set a minimum number of days before they can change the password.

It is up to you whether you enforce this option. Most people are lethargic when changing passwords as opposed to being obsessed with it.

You can remove the limit by specifying the following command: