In this article, we will learn How to Install Nano Text Editor in Linux – A Simple, Modeless Text Editor for Linux. The GNU Nano is an simple and easy-to-use text editor that was originally designed as a replacement for Pico, the NCRES-based editor of the non-free mailer package Pine. However, GNU also implements a number of features missing in the Nano Pico, including: – Undo / Repeat – Line Numbering – Syntax Coloring – Soft wrapping of overlaid lines – Text selection by holding Shift – Interactive search and replacement (with regular expression support) – A Go -To Line (and Column) Commands – Support for Multiple File Buffers – Auto-Indentation – Complete Tabs of Filenames and Search Terms – Toggle Features on the Run – and Full Internationalization Support. 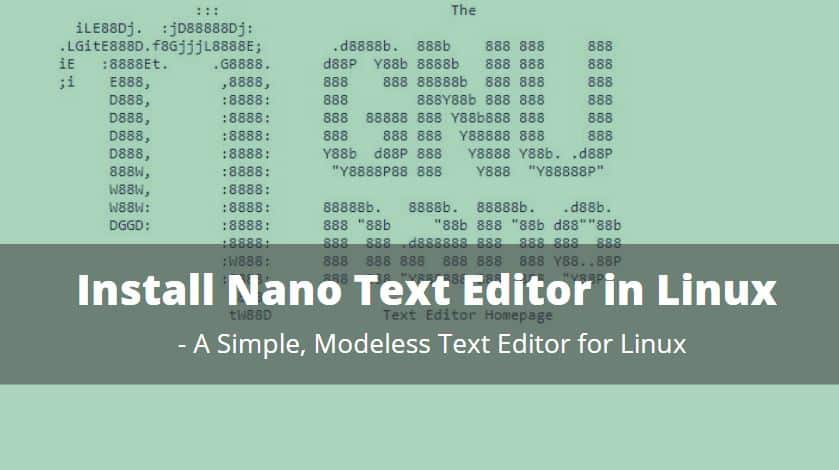 Follow the below steps to install Nano Text Editor in Linux – A Simple, Modeless Text Editor for Linux:

Before installing the Nano Text Editor, we will need to install the required PPA repositories. To do so follow the command below.

We can run this command to install Nano text editor on CentOS/Fedora/RHEL based platforms:

How to Open and Close the Nano Editor?

The main syntax for opening Nano and editing a specific file:

Suppose we have a demo.txt. We want to open a file named. The command will look like this:

You can open .txt, .php, .html and many more. Just remember that if you want to open a specific file, you need to be in the directory where that file is located.

However, if you are in another folder and you want to open a file (demo.txt) in the / path / to / directory, you can enter this line instead:

Useful keyboard shortcuts for navigating include: