Flutter App Development: Pros And Cons For Your Business App

For a layman to understand Flutter app development, you can develop iOS and Android apps quickly, easily and beautifully without compromising on designs using the single code. It has the capacity to deliver the user experience most of the same level as that of the apps developed using native technology. Developers are constantly working on ways to optimize the time for app development and that is where Flutter excels. It was uncovered at Dart developer summit and the first version was known as “Sky”. The first version was running on Android OS and was able to render 120 fps.  It is Google’s modern development kit intended to develop mobile apps for Android, iOS and also on Google Fuschia. 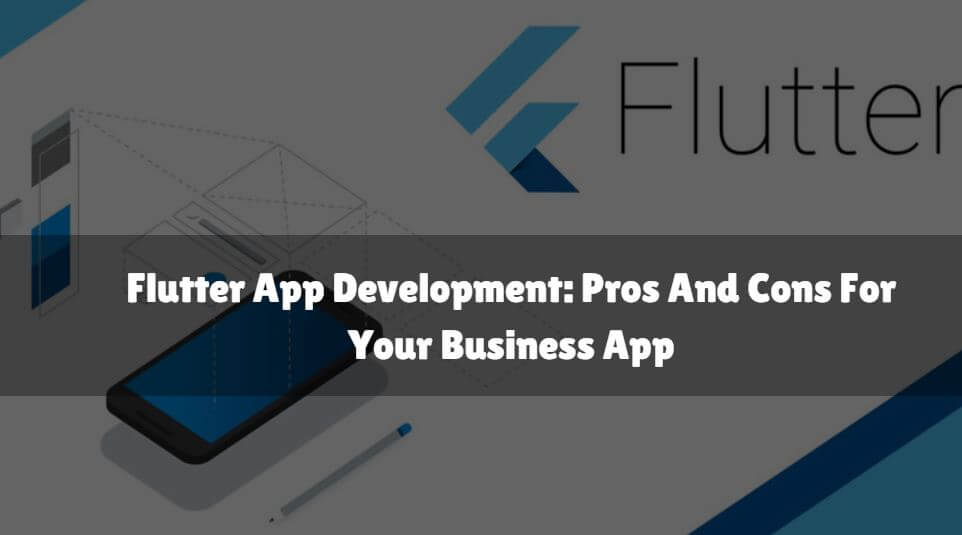 Flutter App Development Pros And Cons For Your Business App

Promises and Facts about Flutter:

Google’s developers have really put in their heart and soul in developing Flutter.  Some of the feature highlights are:

Flutter’s popularity is rising ever since Google’s announcement for the stable version. Different events related to Flutter sprung up around the World.

This article is driven by introspection about Flutter, its advantages, and disadvantages.

China’s biggest eCommerce company’s app, Alibaba is built using Flutter toolkit. Owing to its streamline development process, it is the most sought after platform by the developer community.

Let’s have a look at the advantages:

Just once the code base has to be built and there you go! Your app works cross-platform.

Building apps for iOS and Android with Flutter is much fast. You can showcase your product to the investors if required as soon as possible. It saves a huge amount of time and money.

Flutter uses the programming language called Dart. The object-oriented and strongly typed language uses JIT and AOT compilation that improves the overall startup time and accelerates the performance. With hot reload feature and Just-in-time compilation, there is no need for an entirely new build every time. Dart ensures 100% code sharability between Android and iOS.

Flutter is all about Widgets that are necessary for the app’s view and interface. Flutter comprises of rich widgets set with extensive capabilities. It provides a glitch-free experience regardless of screen size. Flutter uses a unified object model, a widget that can be arranged in a hierarchy based on the composition.

Apps developed with Flutter gives the same feel like that of a natively developed app. It allows you to reuse the existing Java, Swift and Objective C code for accessing the native features of Android and iOS SDKs.

Flutter facilitates good documentation which allows developers to learn the set up easily. Since Google is the parent company, Flutter gets good support from the MAterial Design Team and the community of 1000+ developers.

Let’s have look at the disadvantages:

Since the stable version is just out from the beta version, we can say, Flutter is still young, evolving and developing.

Surprisingly, Flutter apps are supported only on mobiles and not on web browsers. This can be an influencing factor while taking the Flutter decision.

Being relatively young, every functionality that you are looking for may not be available with Flutter. Developers using Flutter build their own libraries which is very much time-consuming.

Same as native platforms, Flutter to has ready-made solutions for popular CI platforms like Travis or Circle, but, you need to set up the tool kit. Flutter also extends the supports of Fastlane and Never code.

Do not expect the apps built with Flutter to run on Android TV or Apple TV. It offers no support for any of the Android or Apple TV.

Some other factor apart from Pros and Cons to be looked upon is:

Cost Of Building an App:

On average, it takes about 250 hours for developing an app on Flutter as compared to 400 hours for iOS and 250 hours for Android. You need to first select the best flutter app development, check their hourly rate and then get the final amount. It will require a lot of resources since it is developed quickly and works cross-platform.

The pathway to Cross-platform development:

The future of cross-platform apps is Flutter. Flutter allows developers not to compromise on quality and performance and still delivering the high-end user experience. Flutter is designed to deliver a unified experience, complex visuals, and native-like features. Let’s end it with the words of Luigi Rosso, co-founder of 2D:

“I love the friction-free iteration with Flutter. Hot Reload sets me in a feedback loop that keeps me focused and in tune with my work. One of my biggest productivity inhibitors are tools that run slower than the developer. Flutter finally resets that bar.”