A security group acts as a virtual firewall for your instance to control inbound and outbound traffic. To create a new security group, complete the fields below.

Search for VPC in the AWS console. On the left side, click on Security Groups in the Security option and then click on Create security group. 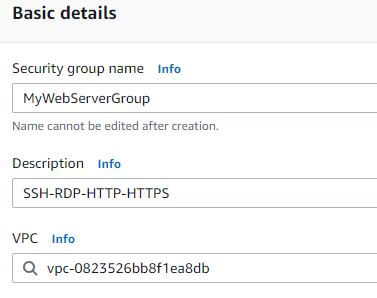 You can choose to add inbound and outbound rules at the time of creation, or you can add them at any time after you have created the security group. To add a security group rule, you must specify:

In the Inbound rules of security group, I will set SSH, HTTP, HTTPS here. You can set what you want according to your requirements.

In the Outbound rules of the security group, I will set the All Traffic here. You can set what you want according to your requirements.

A tag is a label that you assign to an AWS resource. Each tag consists of a key and an optional value. You can use tags to search and filter your resources or track your AWS costs.

That’s all, In this article, we have explained How to Create and configure Custom VPC (Virtual Private Cloud) in AWS Cloud. If you like this article, then just share it and then do subscribe to email alerts for Linux, Windows, macOS, Android, Internet, Firewall and Security, CCTV tutorials. If you have any questions or doubts about this article, please comment.